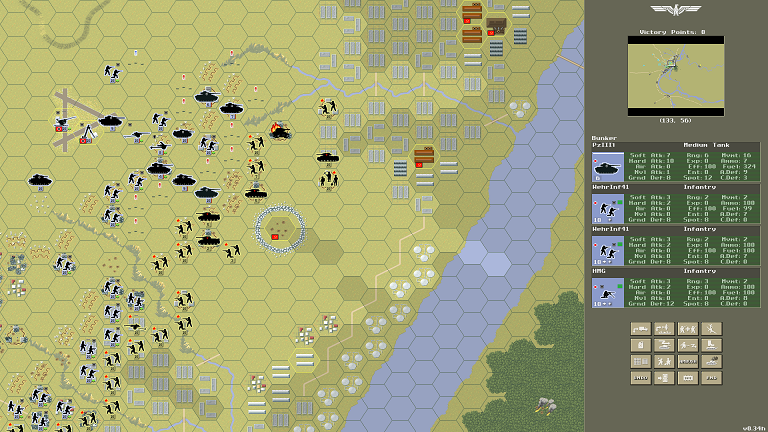 v0.22d
The russians and the germans are at last able to share their views explicitly on the battlefield with all the relevant consequences. 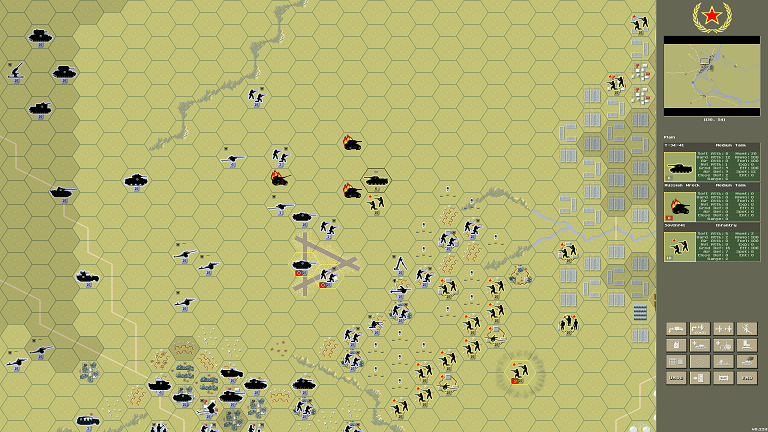 v0.19.6
Here is a sample of the targeting display style. 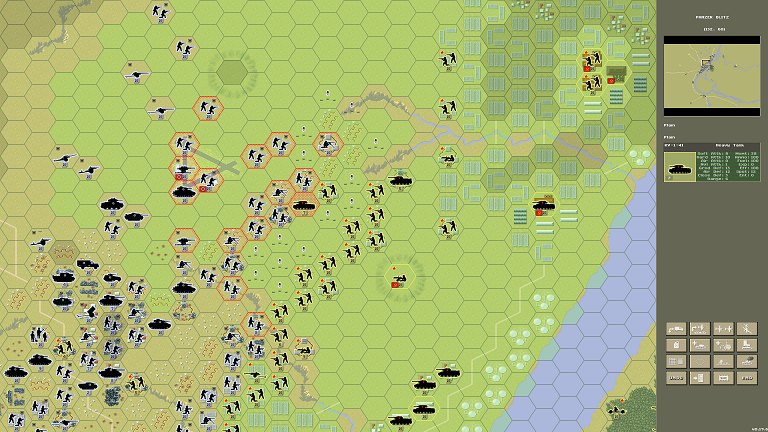 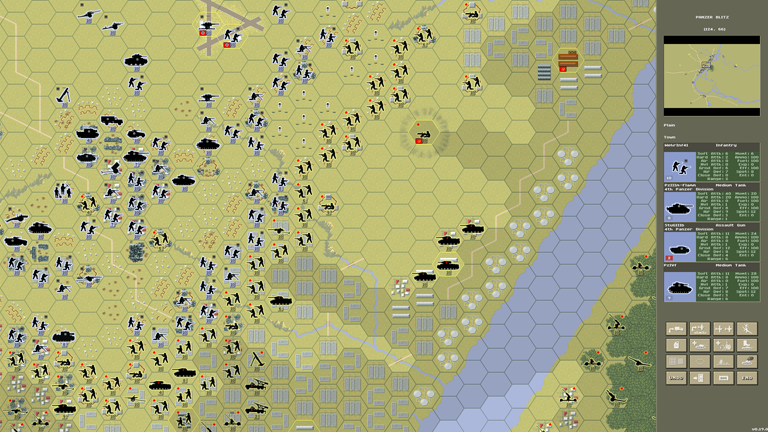 v0.16.3
Movement of units has been implemented and the first command button is now operational, which allows loading/unloading of units
from transport. Each unit in a stack can be individually selected/deselected from the control panel by clicking on it's icon profile
on the right before being given orders. 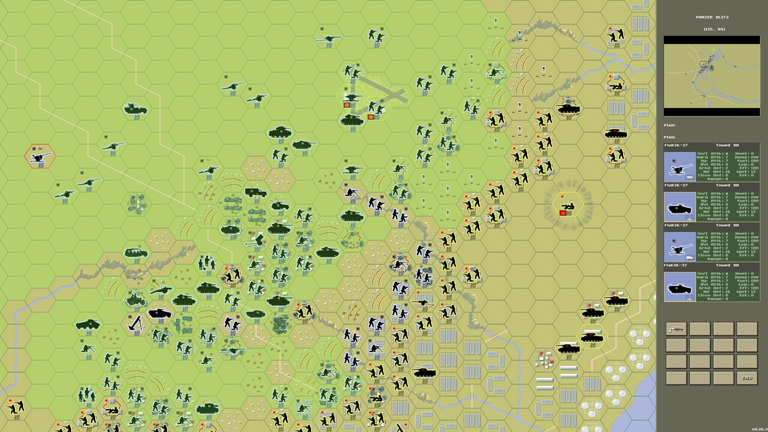 Wow quite a lot of time has passed since I added anything here. Things were very busy while I was renovating my house
and I had very little time to update this blog.
The quality of the hardware scrolling is gorgeous, smooth as can be.
Played Fallout 4 to death and although pretty good, I was somewhat disappointed by the base building side of it as very little
of my main base defenses were ever attacked. 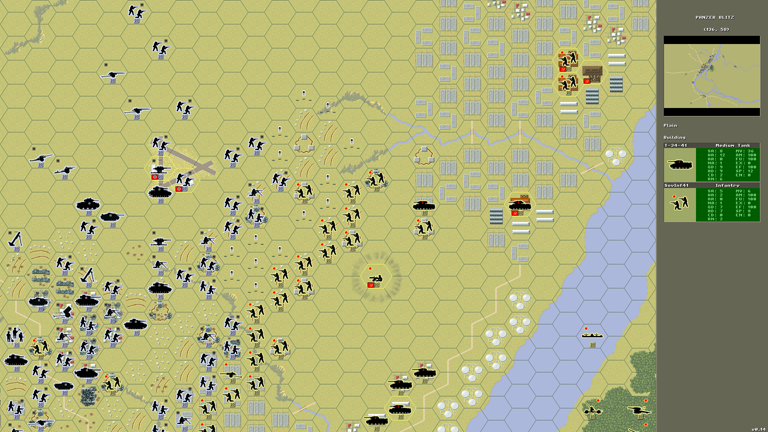 All the tiles for both armies are at last done and I can now start to think about the user interface for the game itself.
Red Orchestra 2 came out but the feedback is not very good. I'll think I'll wait and see before trying it out. Thoroughly enjoying exploring Skyrim, very nice RPG. Bethesda has done it again, but this is far better than Oblivion. They have corrected all the grievances I had with it's predecessor and the result is quite stunning.
Another game not to be missed, this time from an Indie developer, Voxatron, is a work of art that is quite tough but so beautiful and unique in this age of polygons that mere words cannot express how much praise this achievement deserves.
Been reading Free Culture by Lawrence Lessig, which gives a pretty clear expose of what is wrong in todays copyright laws as they are extended to the Internet, but above all shows how the insane costs of defending oneself in the american judicial system are used by some dinosaurs so they can keep their hands on cultural property at the expense of the public interest. 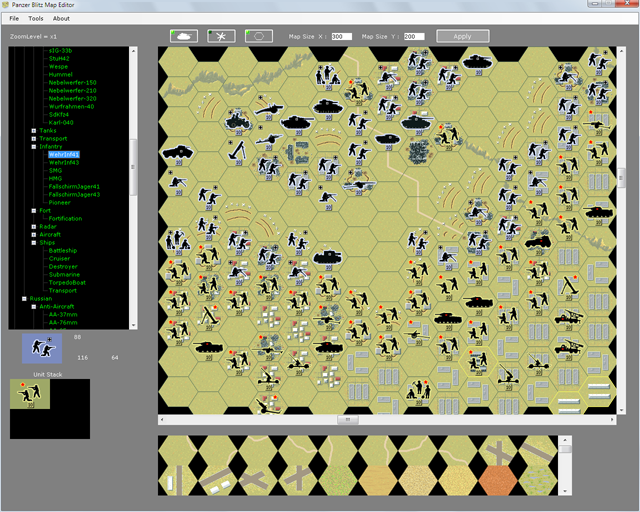 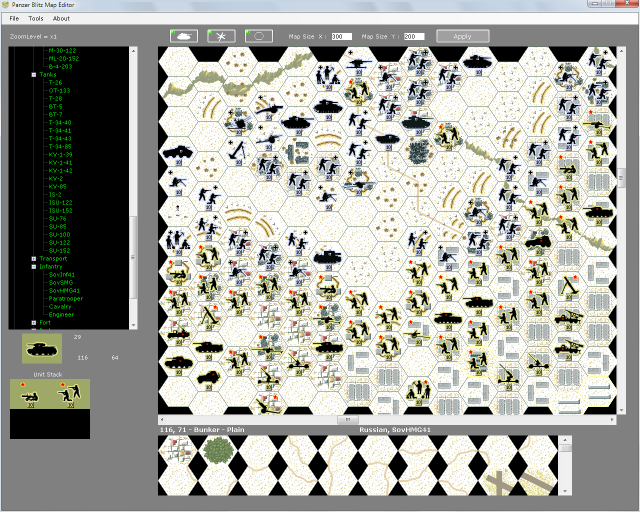 Faster map display routine implemented so x20 zoom out is now instantaneous even on a 300x200 hex map. Panzer Corps came out a few days ago and it seems quite nice but a bit expensive for a remake of Panzer General as a download game. Some of their tactical moves choices are similar to mine but I will be going one step further with things such as opportunity fire if the units' action points allow it. I expect to start coding the game proper sometime in September. Obviously not all maps will be as big as the Stalingrad one, as the scale I am using would entail far too many units to move each turn and become tedious.

Map of Stalingrad area, zoomed out at x20: 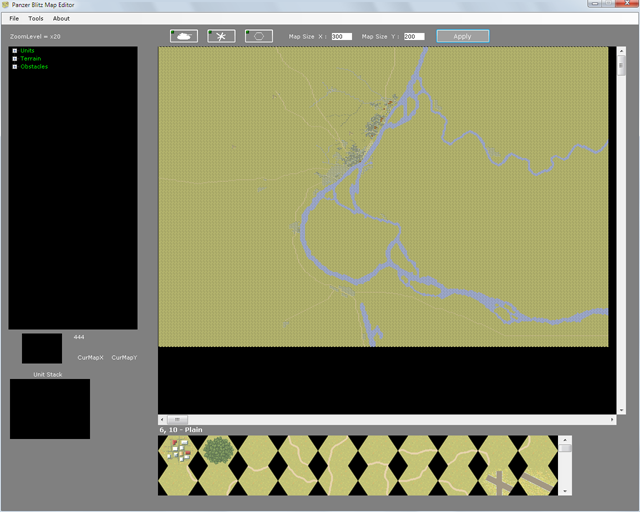 Detail of Stalingrad area, zoomed out at x10: 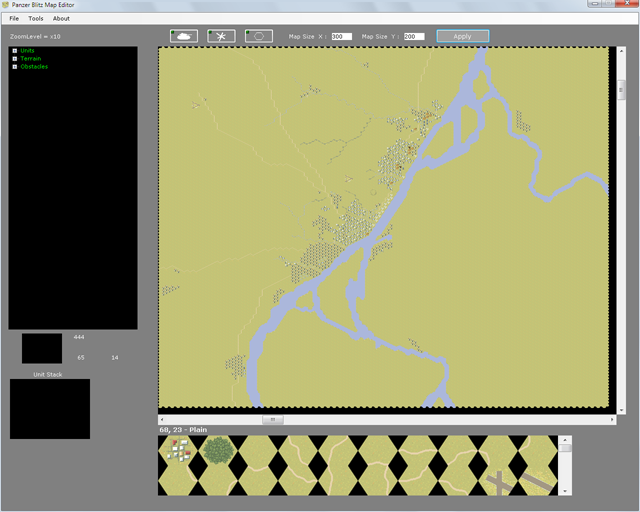 Most of the german units have been done and I will be starting on the russian ones soon. Can't wait to see them move around in the game itself. Got some great sounds for each weapon. Tried out Men at War:Allied Assault the other day and, though it's a decent effort, it suffers from the usual drawbacks of current 3D real-time wargames : battlefield is too small, it chokes a mid-range PC as soon as a lot of units are in play. The scale and repetitiveness of the scenarios make it a bit of a bore quite fast. When one discovers that on of top of that only 2vs2 players multiplayer games are possible because of the 3D being so expensive on CPU and GPU power, it reveals itself far too limited. Sudden Strike 3 had a better 3D scale but it failed because of this idea that there is only a market for 3D these days even if the result is inferior in gameplay to the 2D predecessor. This clearly is a mistake as regards these types of games. The processor and graphics resources saved by using 2D can be put to better use in pure gameplay, especially in multiplayer battles where more players and animation would be far more interesting than battling with a camera angle.
I am typing this on a Filco mechanical keyboard, truly a wonder to behold. Immediately deactivated the damn Windows keys on it of course and why there still is a CapsLock key in that part of the keyboard is beyond me as it gets hit by accident far too easily.

Here you can see some of the new German units with a better outline than the previous dithered one: 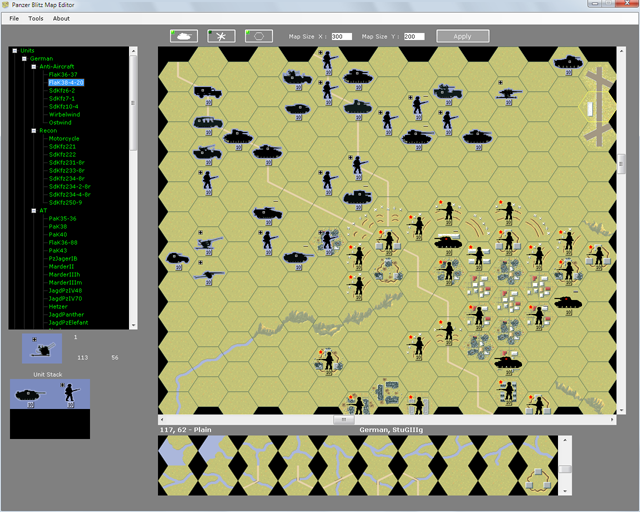 I have started the new dev blog for this project at the same time as the new website.

The Map Editor for the game is more or less finished and I have produced the first map for the game : Stalingrad in 300x200 hexes. The city is reproduced to scale with all the important buildings marked as victory hexes with the relevant historical names as they were in 1942.

An early test screen that shows the graphic style I am going for : 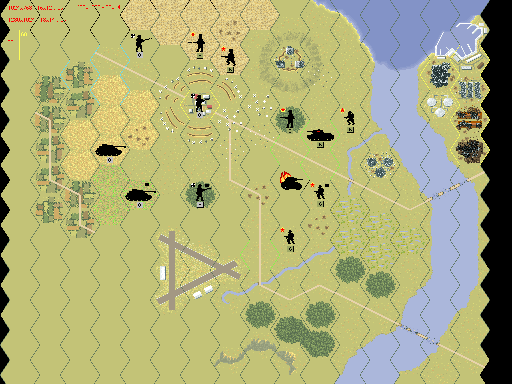 Here is a screenshot of the editor itself : 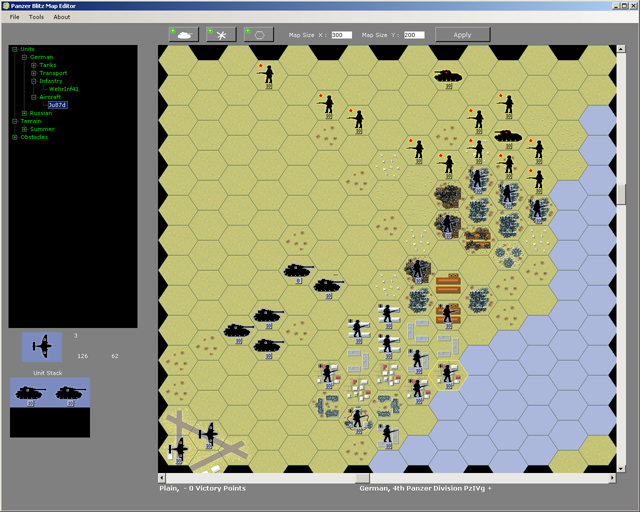